Bitstreet.co recently penned an article on Suril Desai, introducing him as “an analyst at Nishith Desai Associates, one among a handful of law firms in India trying to develop a way to present the Bitcoin framework effectively so that its legitimacy comes from the fact that it is decentralized, rather than regulated”. Nishith Desai Associates had completed a study surrounding Bitcoin in India and had found that Bitcoin is not illegal in India.

Suril posted a request on a Bitcoin Whatsapp group recently, for a small gathering of Bitcoiners to visit Mumbai and engage in a full day discussion on Bitcoin in India. Investors, Entrepreneurs, Lawyers, Media and Jack Hidary, amongst several others, gathered to discuss possibilities surrounding Bitcoin in India.

The meeting began with Suril welcoming the guests and introducing the topic for the day, ‘Dissecting Bitcoins’. Mr. Nishith Desai, of Nishith Desai Associates, then stepped forward to shed light on the issue at hand. He mentioned in his speech that new technology brings with it new problems. Describing his law firm as constructively disruptive, he offered insight into the mindset and culture that nurtures breakthrough innovations such as bitcoins.

Sunny Goenka, provided a powerful overiew on Bitcoin and the Evolution of Money. He spoke about several global scenarios involving hyperinflation. He continued to testify about Bitcoins soundness by displaying a quick statistical overview on its long term prices along with the names of some of the large companies that accept Bitcoin globally.

The guts of the system were examined by Amitabh and Benson Samuel, where Amitabh introduced, that the origin of blockchain technology lies in cryptocurrency, which ensures that there is no single point of failure and ensures peer to peer payment. He continued to state that the bitcoin public ledger is an application of the blockchain technology. Everyone has an identical copy of the ledger, which lasts forever, similar to a bank ledger. One can only add and not remove entries. It is practically irreversible and the process of adding transactions is known as mining. It is a disruptive technology. IBM, Infosys, and banks were looking into this technology.

He proceeded to explain that Bitcoin comprises of rules embedded in software, cryptography (hash function and digital signature) and miners (who provide proof of work). The room engaged in several discussions at this point, trying to simplify the concepts and understand why this is the future of money.

The session concluded with the summary that the fundamentals of bitcoin look strong. It has been around for over 5 years now, but even with 5 years under its belt, the subject is still new and needs further exploration. 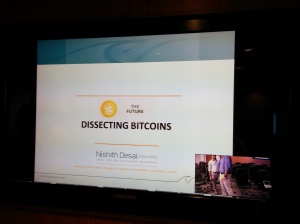 Niki Gomez, an economist working with Wired Magazine, started the post lunch session with a quick overview on Bitcoin in a simple manner, outlining several of its characteristics.

Jack Hidary, board member on Google-X and co-founder of X-Prize took the stage alongside Vipin Surelia who is the Head of Cheque Clearing for National Payments Corporation of India, for a fireside chat.

Jack Hiddary raised the question on the approach towards Bitcoin in India by the Indian Government. Vipin talked about a meeting of all the Central Bank officials of countries across the world in Johannesberg, where a stance was taken to wait and watch the development of the Bitcoin. He went on to conclude that the regulators decided on a wait and watch policy for India, as they did not want to stifle innovation.

Vipin explained that in India 90% transactions are in cash, 3% are electronic and 7% of them are in cheque.

This further testified to the decentralised structure that India is already accustomed to, and the growth potential of Bitcoin. While cash is highly anonymous and attempts at being phased out are in progress, Bitcoin is already in the space of providing a decentralised model for the world to adopt and create transaction trails. 90% of a country transacting through cash and hand to hand transactions, is a strong case for decentralizing rather than centralizing further.

Mr. Nishith Desai concluded the day with a request to help clear the uncertainty surrounding Bitcoin in India, from a neutral perspective. While organic adoption of Bitcoin will occur over time, some of the steps outlined below should pave the way for greater clarity and ease of entry from existing companies and interested parties as soon as possible.

1. A set of rules on how the Bitcoin Policy in India needs to be developed.
2. A committee or a think tank should be created comprising of industry players, bitcoin experts and academicians both national and international. Maintaining credibility is very important.
3. The present Government is keen on consulting. The above mentioned think tank should have its research and policy in place before approaching the Government in a consultative capacity.
4. The first step will be a press release. The think tank will be funded by using crowd funding, funds from research organizations and the contributions of the think tank members.
5. A public ledger will be created for funds subject to certain rules. If rules aren’t followed, the concerned person’s pipeline will be cut off. This is how transactions will be validated.
6. The think tank needs to be independent. It should not be politicized for preserving credibility and integrity.
7. The main issues identified with regard to the think tank were :
a. Budget
b. Driving of the committee
8. The present members will keep in touch through a Whatsapp group and meet again as decided.

The overall outcome was positive, with a huge emphasis on innovation along with responsible self-regulation.